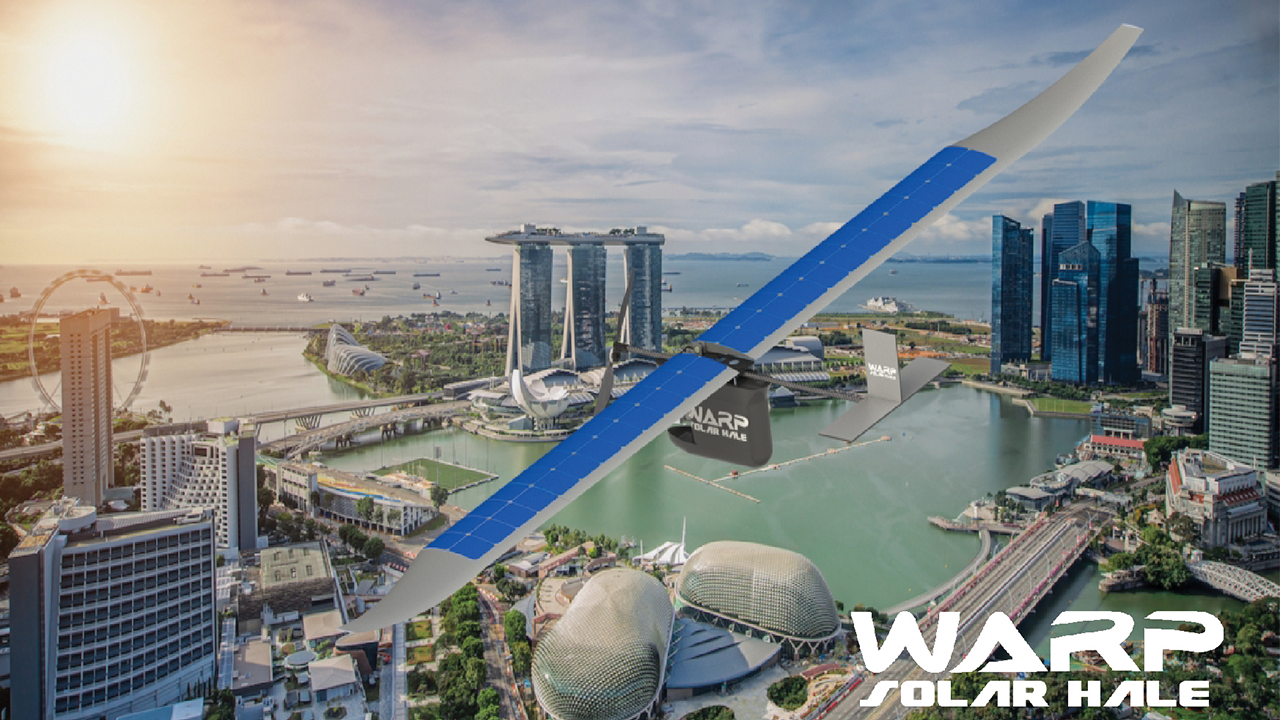 The past decade has seen the proliferation of UAVs in remote observation and communication. The use cases for UAVs range from data collection, delivery to increasingly complex tasks. These applications are however constrained by the limited endurance of current UAV platforms. Our solution in producing solar-powered platforms. By dramatically increasing flight endurance, solar UAVs are set to revolutionise aviation, maritime, security and scientific observation domains.

We have designed and developed an ultra-lightweight solar fixed-wing Unmanned Aerial System with embedded navigation and control systems. With further R&D on the navigation, control of the plane, design of the structure, and the energy generation system, the unmanned aerial system will be capable of continuous flight over days, which makes it suitable for a wide range of applications.

The last few years have seen several innovative aircraft take to the skies. In August 2018, a solar-powered aircraft from Airbus completed a maiden flight lasting 25 days, 23 hours, and 57 minutes.

In 2016, the Solar Impulse 2, a manned aircraft powered by the sun, completed a circumnavigation of the globe without using fuel. The trip was completed in 17 separate legs.

How Solar Planes are useful ?

2. Collecting, Transmitting and Relaying Data – The system will be able to act as a relay between communication satellites, ground stations, ships and other aircraft. Able to support long-range command and control requirements such as orbital rocket launches. The system may also be used for scientific research or bring remote internet access(5G network) to remote regions.

There are no emissions from the aircraft while in flight, so solar-powered aircraft has a minimal impact on the environment.

The stratosphere is a new frontier for competition between aviation and technology giants where solar planes could offer advantages over satellites. This includes lower costs, easier manoeuvrability and fast deployment turnaround time. Solar planes will be able to support and complement the current satellites and ground stations acting as relays. In improves the data transfer. Such technology also could support BLOS ( Beyond Line of Sight) missions such as launching rockets.

Subsidiaries of Airbus SE, Boeing Co and Softbank Group Corp are developing stratospheric drone which could fly autonomously for months. A research firm NSR said that high-altitude aircraft which includes, drones, balloons and airships could bring in 1.7 billion in revenue over the next decade. There are an estimated 40 programs underway. With Singapore being strategically located, we are a known hub for various things. Having a stratospheric capability will put us on the map as one of the most capable countries in the oncoming future.

The design challenge is coming up with a lightweight drone with a relatively high aspect ratio so it can generate sufficient lift with slow flight in the stratosphere. (Less dense air). The aircraft design should also allow for maximum efficiency across all technical aspects including batteries, MPPTs and flight performance. It’s a journey of constant development. Both photovoltaics (PVs) and battery technology is evolving rapidly and in time to come solar planes will be able to silently fly over you and execute complex tasks that drones of today can achieve. Just that this time, with better endurance.

Testing of the aircraft is also relatively safe as there’s no substantial centre of mass to cause serious damage. The aircraft generally will float like a feather.

To develop sustainable and profitable unmanned solutions and services for various industries.

We have designed and developed an ultra-lightweight solar fixed-wing Unmanned Aerial System with embedded navigation and control systems. With further R&D on the navigation, control of the plane, design of the structure, and the energy generation system, the aeroplane will be capable of continuous flight over days, which makes it suitable for a wide range of applications.

Solar power provides much less power than conventional engines running on jet fuel” – Marc Stettler, a lecturer in transport and the environment at Imperial College London’s Centre for Transport Studies

Beyond the fact that solar power allows the aircraft to obtain extended flight times. Our teams explore an intelligent system that seeks out Thermals, Ridge lifts and Wave lifts that are present in the environment. This action allows the platform to perform efficient flight profiles autonomously.

Thermals are columns of rising air created by the heating of the Earth’s surface. As the air near the ground is heated by the sun, it expands and rises. Pilots keep an eye out for terrain that absorbs the morning sun more rapidly than surrounding areas. These areas, such as asphalt parking lots, dark plowed fields and rocky terrain, are a great way to find thermal columns. Pilots also keep a lookout for newly forming cumulus clouds, or even large birds soaring without flapping their wings, which can also be signs of thermal activity.

Once a thermal is located, pilots will turn back and circle within the column until they reach their desired altitude at which time they will exit and resume their flight. To prevent confusion, gliders all circle in the same direction within thermals. The first glider in the thermal gets to decide the direction — all the other gliders that join the thermal must circle in that direction.

Ridge lift is created by winds blowing against mountains, hills or other ridges. As the air reaches the mountain, it is redirected upward and forms a band of lift along the windward side of the slope. Ridge lift typically reaches no higher than a few hundred feet higher than the terrain that creates it. What ridge lift lacks in height however, it makes up for in length; gliders have been known to fly for a thousand miles along mountain chains using mostly ridge lift and wave lift.

Wave lift is similar to ridge lift in that it is created when wind meets a mountain. Wave lift, however, is created on the leeward side of the peak by winds passing over the mountain instead of up one side. Wave lift can be identified by the unique cloud formations produced. Wave lift can reach thousands of feet high and gliders can reach altitudes of more than 35,000 feet.

Notable Applications of the technology.

The Australian landscape has been recently shaped and impacted by bushfires. Its been an occurrence for thousands of years. This affects lives of many including natural flora and fauna. Over the last 50 years, Australia has been experiencing more bushfires due to climate changes. In the past ground intelligence and communications supported the management of these fires. However, the use of satellites will further assist in identifying hotspots, prevent spread and mitigate disasters. Bush fire detection, fire-spread modelling, thermal imaging, moisture content monitoring and live streaming of situation would be further enhanced by the use of pseudo satellite technology such as the solar plane. More planes can be easily launched and able to provide detailed and accurate information through the use of clustered flights. The information can be directly relayed to the relevant authorities and disaster relief stations instead of the requirement of various levels of processing and handovers.

The second kind of solar panels is based on harnessing energy from thermal processes. When the sun is hotter and the earth is cooler, the difference in temperature can be used to convert to usable energy. Read more

The Singapore Airshow was considered as a major milestone for the team. Though the event was severely affected by the COVID-19 Virus issues. We still went for it. We knew it was an opportunity we couldn’t let go off. Our work was also featured on the straits times newspaper. Overall, the experience was very fruitful to us as a team.

Choosing a name for the team was a long and tedious process. However, we all agreed with the name WARP. We also prepared several business-related information that would be vital for investors considerations within days. The airshow provided a great opportunity to pitch our idea and garner feedback. Though the response was minimal due to the crowd. It did seem fairly positive. We did also meet several key people that shared their insights with us.

Check out our official page, www.warpsg.com

While many think our ancestors have deep pockets, or we have struck the lottery. Neither scenario is true, though it would have made our lives much easier. We have bootstrapped the development since day one. We believe strongly in our plan and idea. How can you expect an investor to put in money while you yourself will not take a risk? We have spent more than10k SGD in the project thus far.

If you wish to support us by making a donation or by being an investor, please do contact us through adlabssg@gmail.com or contact us